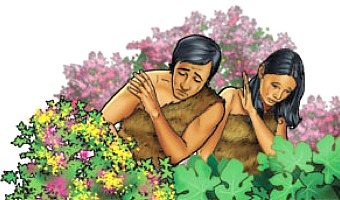 Gen. 3:21 “Unto Adam also and to his wife did the Lord God make coats of skins and clothed them.”

There is tremendous love and honor in each of these verses.  Adam and Eve had disobeyed and their eyes were opened to their nakedness.  They had no history of anyone else sinning to refer to.  There was no way of knowing what would happen next, but they hid from God, who they had only ever known to be good. Who told them they were in trouble?  What did the enemy or maybe even their own minds say to them about God while they were hiding?

Of course, our actions have consequences and theirs caused all of us to suffer.  But a lot of people miss what our good father did for them when He fashioned clothes of skin for them.  He covered their nakedness (shame) with skins, from animals that would have been the very first sacrifice, sacrifice covers.

Fast forward to Noah’s boys.  He’s passed out after getting drunk.  Ham sees him naked and reports it to his brothers.  The brothers grab a blanket and are careful to walk in backwards to cover their dad, this is deep.   How often are we witness to the shame of those who are closest to us?  When someone’s sin and shame are exposed to us, what do we do with it?  I know that in my own insecurity I have exposed the sin and shame of others.

What a gift to one that has sinned, that when you see their sin and shame exposed, and you both know that punishment is deserved, you cover them first.  I say first because even though the sin is covered, there are still consequences.   God made it a priority to let Adam and Eve know, first that He would cover them, He would be with them and He was not angry at them.

The enemy assaulted Adam and Eve’s minds regarding God’s goodness and they hid.  We also hide from God when we feel shame.  As many times as He shows us His love and grace.  The greater fear is that God will ultimately reject us.  The truth is that even when we sin, He will cover us and He will not forsake us.  We have a God, who isn’t like an earthy father that lashes out in anger to punish.  We have a God that covers and corrects.

Ham chose to expose while the others chose to cover.  Every time someone close to us misses it we make that choice, cover or expose.  I do believe, there is a curse or a blessing attached to each choice, just as there was assigned a curse to Ham and a blessing to Shem and Japeth.

In my aggravation, disappointments, fear and anger in relationships I have “shared” (gossiped) with my friends about what was happening.  I justified my sharing as venting.  But each time we “vent” and there’s opportunity for the other person to join you in your offense.  What I was actually doing, in a crafty way and not even totally aware, was painting a picture for my friends of what happened with the other person as the villain and I as the victim.  I was getting them to empathize with my side, therefore they were wrong and I was right. I chose to expose.

When we cover another we are showing love and grace.  When we have to offer discipline or hard truths and we cover first, we are showing kindness that produces trust and security.  It’s not easy to cover, it takes strength and integrity.  When we are wounded we want to find someone to blame, we want others to validate us.  But we must remember that blessing follows the ones that cover.  Let’s strive to cover and not expose.