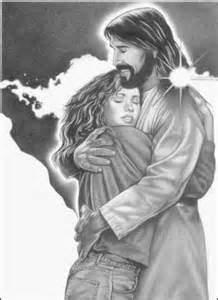 There are times when I feel Jesus is very close.  In church, during worship, I imagine him standing in front of me, his hands on either side of my face looking into my eyes, shutting out the noise and distractions, turning my focus to Him.  Then I feel peace.  Last Sunday, I imagined He was standing behind me, arms around me, His face next to mine, as we swayed to the worship music. I felt cared for and loved.

Other times and more often than not, I feel a distance between us.  How can I relate to a perfect man?  A serious man? I wrote a song once called “Jesus Smiles.”  It was about Jesus laughing with His disciples, enjoying His life.  I wrote it, because in general, I don’t picture Him smiling.  I see a serious, perfect man that I can’t relate to.

I’m reading a book lately (Driven by Eternity, John Bevere) that is describing Heaven in a way I haven’t thought much about, a new world with different cities and people that live in particular parts of the world depending on how they served God on Earth. I found myself being ok with the idea of living on the outskirts of Heaven, not necessarily living and working near Jesus.  Why!?

I want my motivation for serving Christ to be spending an eternity with Him, not just staying out of Hell and having all my prayers answered.  If I’m not connected to Jesus, I will be deceived.  When I’m connected to Him, He shows me the way to go, tells me what to do.  He renews my mind and I can then make corrections in my thinking and actions.

I’m going to commit to seeking more of those close-to-Jesus moments.  I need to nurture my relationship with Him.  I have to allow His purity and perfection to cover my sins and imperfections, that is the point…we are sinners, in need of a Savior.  The Enemy distort the character of Jesus to us,  because keeping us from Jesus, keeps us from living the way He commands us to live.  The truth is that Jesus LOVES us. Here are just a few attributes of Jesus that tell the truth about who He is….He is our Mr. Perfect, in the very best way.

When He walked the earth He covered sinners, He did not condemn them.

John 8:7
When they kept on questioning him, he straightened up and said to them, “Let any one of you who is without sin be the first to throw a stone at her.”

He died For us.

But God demonstrates his own love for us in this: While we were still sinners, Christ died for us.

He touched the untouchables.

20 Just then a woman who had been subject to bleeding for twelve years came up behind him and touched the edge of his cloak. 21 She said to herself, “If I only touch his cloak, I will be healed.”

22 Jesus turned and saw her. “Take heart, daughter,” he said, “your faith has healed you.” And the woman was healed at that moment.

He ate with people society looked down on.

19 Jesus entered Jericho and was passing through. 2 A man was there by the name of Zacchaeus; he was a chief tax collector and was wealthy.3 He wanted to see who Jesus was, but because he was short he could not see over the crowd. 4 So he ran ahead and climbed a sycamore-figtree to see him, since Jesus was coming that way.

5 When Jesus reached the spot, he looked up and said to him, “Zacchaeus, come down immediately. I must stay at your house today.”6 So he came down at once and welcomed him gladly.

He showed mercy to sinners, even in His own suffering

Luke 23:32-43, (NAS95) 32 Two others also, who were criminals, were being led away to be put to death with Him. 33 When they came to the place called The Skull, there they crucified Him and the criminals, one on the right and the other on the left. 34 But Jesus was saying, “Father, forgive them; for they do not know what they are doing.” And they cast lots, dividing up His garments among themselves. 35 And the people stood by, looking on. And even the rulers were sneering at Him, saying, “He saved others; let Him save Himself if this is the Christ of God, His Chosen One.” 36 The soldiers also mocked Him, coming up to Him, offering Him sour wine, 37 and saying, “If You are the King of the Jews, save Yourself!” 38 Now there was also an inscription above Him, “THIS IS THE KING OF THE JEWS.” 39 One of the criminals who were hanged there was hurling abuse at Him, saying, “Are You not the Christ? Save Yourself and us!” 40 But the other answered, and rebuking him said, “Do you not even fear God, since you are under the same sentence of condemnation? 41 “And we indeed are suffering justly, for we are receiving what we deserve for our deeds; but this man has done nothing wrong.” 42 And he was saying, “Jesus, remember me when You come in Your kingdom!” 43 And He said to him, “Truly I say to you, today you shall be with Me in Paradise.”

One thought on “Mr. Perfect”